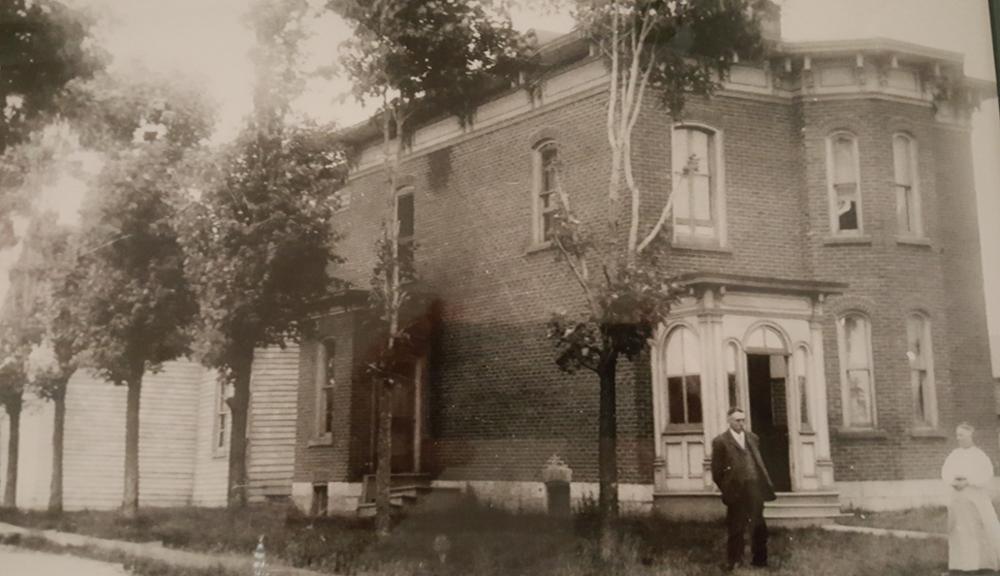 The Funeral Home history in Odessa dates back to 1860 when John Jones founded the Jones Funeral Home. Records show that the business was operated as Watts and Jones. The Watts business was known for its craftsmanship on carriages, coffins and furniture. The business was later run by John’s son, George Jones and then by his grandson, Ross A. Jones. At one time the business was located in the “Shanty”, later moving next door in what would become the Odd Fellows Lodge building. In 1940 Ross Jones purchased a beautiful triple brick century home built in 1884, located at 178 Main Street in Odessa. The funeral home has operated in that same location ever since. Ross along with his son Donald continued operating the family business until Ross’s retirement in 1970. After 110 years of service and no one to continue, the Jones Funeral Home closed. With continued support and a need from Odessa and surrounding communities, the Thompson family purchased and reopened the Jones Funeral Home. The Thompson family ran the business for a short time until 1985. In 1985, Paul and Janet Payne from the Toronto area came to Odessa and purchased not just the Jones Funeral Home but also the White and Morris Funeral Home in Deseronto. As more and more families placed their trust with Paul, it became difficult for him to operate both locations. The Deseronto location was then sold to a good friend and funeral director, Larry McGlade. In the 1990’s the name of the Jones Funeral Home in Odessa was changed to the Paul G. Payne Funeral Home. The original Jones Funeral Home sign reading established in 1860 still remains in the building today. The dream of offering trusted, caring, compassionate and professional service continued for Paul and Janet for 30+ years. Odessa will always be a special place to Paul and Janet and their family. In July of 2016, Jason Smith and his wife, Collette (nee Hunt) from Tamworth purchased the Paul G. Payne Funeral Home. Paul and Janet instantly knew that Jason and Collette were the ones to continue on for them. A dream of Jason’s was realized. Families can see that Jason cares about them and their loved ones. Jason takes his role very seriously. He was meant for Funeral Services. The couple have two young son's, Hudson and Harvey. They are their pride and joy. Jason and Collette moved to Odessa in the fall of 2017 and are happy to call this great community home. Tamworth and area will always hold a special place in their hearts. In their spare time, the family enjoys touring country roads, quiet time at the family cottage, antiquing, auctions, and most importantly, spending time with family and friends.